About a hundred years ago New York’s avant-garde Society of Independent Artists advertised for entries to its first Open Art Exhibition. Among the artworks put forward was an ordinary ceramic urinal, unaltered as if straight from the manufacturer or a building supplies merchant. It was submitted anonymously and was unadorned, except for ‘R. MUTT’ hand-painted on one side. But this ‘signature’ was confusing: it was neither the name of  the urinal’s maker or supplier nor the artist submitting the piece. The Society advocated radical new alternatives to the conventional Art establishment, its credo was, ‘No judge, no prize,’ and one of its rules stated that every artwork offered for inclusion in the Open Exhibition should be accepted, but in spite of this the urinal was rejected and it was not exhibited.In late 2016 Beverley Art Gallery (BAG) in the East Riding of Yorkshire advertised for submissions for its Open Art Exhibition. Among the submissions was an ordinary ‘bog standard’ ceramic urinal, adorned by an enormous bright red phallus on which a small rocking horse with a wide-eyed grinning cartoon face had been fixed. Although not submitted anonymously, the artist was virtually unknown. The Art Gallery’s annual show is popular and has a rigorous selection procedure. The piece was immediately recognised as some sort of homage to mark the centenary of Marcel Duchamp’s iconic urinal of a century ago, but the title: Baroness Elsa von Freytag-Loringhoven [1917…2017] was confusing. Nobody knew who the Baroness might be, but the urinal was accepted and exhibited.

Around 1917 the imaginative and humorous works of Dadaist artists were catching much media attention. Frequently irreverent, anarchic and nonsensical, Dada (the word may derive from the Russian for ‘yes yes’, or the French for rocking-horse) had been formed in Zurich but became memorable in New York, in large part due to Marcel Duchamps, an energetic, charismatic French artist who had moved to Manhattan in 1915. Duchamps was a Director of The Society of Independent Artists and may well have been party to rejecting the urinal. Perhaps the Society feared ridicule, in that acceptance would have publicly advertised their inability to distinguish between a work of Art and a piece of manufactured sanitary ware. Over the last century it has become commonplace for weird and unlikely things to be presented as Art and it is now widely (though not universally) accepted that in Art what matters is designation and context: i.e. anything is a work of Art if the artist says it is; and anything exhibited in an Art gallery is ipso facto a work of Art (even, on occasion, light switches on the wall or piles of dust in the corners). Also, if an Artist has a big name and an Art gallery has paid a lot of money for his (or occasionally her) work, the status of a work of Art is both enhanced and assured.Years later Duchamps claimed that in 1917 it was he who had anonymously submitted the urinal, to save The Society embarrassment (although he also denied that claim) but at the time he wrote to his sister, ‘One of my female friends, who had adopted the male pseudonym Richard Mutt, sent me a porcelain urinal as a sculpture.’ That female friend was likely Baroness Elsa von Freytag-Loringhoven, a well-known eccentric, ‘multi-sexual kleptomaniac scatologist’ described as ‘the first American Dada artist’ (although she was German). The original urinal is lost, its significance unrecognised at the time it was likely thrown out with the trash, but its fame gradually spread via a photograph taken by Alfred Stieglitz and articles in Art journals. ’Fountain’ came to be regarded as a seminal object in a uniquely American branch of modernism: conceptual art. A blasé Duchamps allowed his name to be attached to it, not Elsa’s, and from the 1950s he ‘authorised’ 17 copies of the urinal for Art galleries around the world. Millions of pounds have been invested.

Elsa Plotz was born in Germany in 1875. Her mother attempted suicide and died in an institution after her abusive husband infected her with syphilis. Elsa said that her mother, ‘left me her heritage - to fight!’ She married three times, first to avant-garde architect August Endeu, then to Felix Paul Greve who translated Oscar Wilde. Greve faked his own suicide to escape creditors and fled with Elsa to the USA, where they divorced. Elsa then married a German aristocrat Leopold Karl Frederick Baron von Freytag-Loringhoven, who’d also come to the USA to escape debt. The Baron soon absconded with Elsa’s paltry savings and that marriage ended. Elsa may have been impoverished financially but not artistically, and she now had a resounding title and an entrée into New York’s Art circles.As a Dadaist exhibit and ‘readymade’, a urinal has typically nonsensical and humorous connotations - the expression ‘taking the piss’ springs to mind. But Elsa may have had other motivations: the piece has both political and feminist interpretations. A German, Elsa was seriously angered by the USA’s entry into the 1st World War, so the piece may be seen as a protest about that, as well as the way men were making such a mess of the world, i.e. pissing on it. Also, the letters R. MUTT had been used previously by her as a ‘signature’ - it sounds like armut, German for ‘poverty’ or ‘intellectual poverty’. But ’Fountain’ had no public exposure in 1917 and its appearance did not become recognised as a significant moment in modern Art until many years later. Elsa herself made no claim or even reference to it although she did know Duchamps and referred to him as M’Ars (i.e. ‘my arse’). So was Duchamp’s failure to acknowledge her contribution an act of deliberate, calculated misogyny? Certainly he was happy to take the credit for ‘Fountain’ when he might, in all honesty, have said, ‘Yes I was there, but it was actually my friend Elsa whose concept it was and who actually submitted the urinal.’ But he didn’t, so it is his name alone which was, and continues to be, associated with the first ‘pure readymade’. During his life as an artist, Duchamps created an impressive body of notable and influential artwork and when he died in 1968 he was famous and wealthy. Elsa had died in 1927 aged 52, in poverty, poisoned by fumes from an old stove she’d bought because it looked like a coffee pot.

The urinal submitted for exhibition in 1917 which became famous as ‘Fountain’, was an unaltered and unadorned piece of sanitary-ware divorced from its intended practical purpose (it was horizontal and not plumbed in). But when it (or one of Duchamps's authorised ‘copies’) is displayed in an Art gallery, it becomes a valuable work of Art, as if it is saying, ‘You might think I’m nothing but a piss-pot, but look at me now!’ As an Artwork it may be seen as a radical cry of objection to, and dissociation from, the exclusive world of the conventional Art establishment; a move towards more ‘industrial’, contemporary and relevant subject matter.

Or an artefact whose curves and folds, whose mass and solidity, whose clean shell-like form and pure, unequivocal surface… in other words whose aesthetic qualities may be appreciated as sculpture.

Or a designed object which, although stripped of functionality and sanitised, conjures in the observer’s mind emotions and notions pertaining to its original purpose as a repository and conduit for the product of an everyday intensely personal yet universal human and animal function, the passing of waste.

Or, as Elsa herself may have intended, as a howl of anger directed at the government of the USA who had lately declared war on her home country Germany, thereby plunging the world into the World War One.

Or, perhaps most contemporarily relevant, it was a feminist cry of outrage against the piss-awful mess that men, and only men, were (and are) making of this precious planet of ours. Or all of the above. It has been a seriously controversial object, much talked and written about for a hundred years.The urinal entitled ‘Baroness Elsa von Freytag-Loringhoven  [1917…2017]’ currently on display in the BAG has clearly been made to honour the centenary of the significant and iconic piece known as ‘Fountain’ - and its originator. Like the original, it is a standard ceramic urinal from a builder’s merchant, but in this case the pissoir is fitted with a  grinning wild-haired Elsa driven by a clockwork metronome which rocks her like a rocking horse and is mounted on a large red phallus rising from the plug-hole. The urinal appears to be partially plumbed in and is set against a section of painted wood-panelled toilet wall. Among the graffiti on the wall may be read - ‘Champ? My arse!’, ‘3 things I hate - 1. Lists, 2. Graffiti, 3. Irony’, ’My heART belongs to DaDa’, and ‘f*ck everyone’.

At BAG a label the submitting artist attached to the piece advising that although the mechanism is fragile, a sympathetic ‘feminist with a delicate touch may wind the key to set the mechanism rocking’, has been removed. In addition the key itself has been taken away: the ‘Baroness’ is isolated in a clear acrylic display cabinet and cannot be touched, wound up and operated, and therefore cannot be seen seen working as intended. The piece has stripped of a significant portion of its meaning, which includes all of the afore-mentioned possible interpretations as well as a centennial cry of violent objection the the way Elsa, both in 1917 and throughout the century since, has been silenced, denied her rightful and proper acknowledgement. Enormous phallus notwithstanding, Elsa has been emasculated, again. But, as a senior spokeswoman of the Art gallery commented with a dismissive shrug, ‘The Art world is full of the claims of unknown wanna-bees.’ 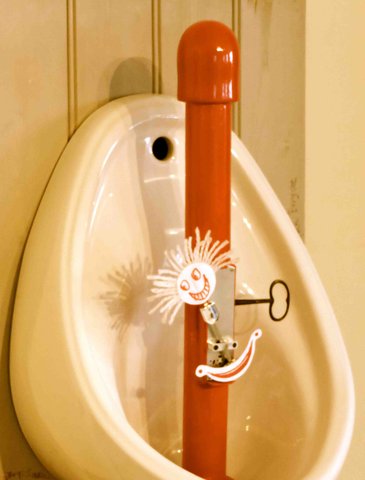